THE LOWEST MARK FOR: ALCOHOL DENAT. – DEHYDRATING AND IRRITATION-TRIGGERING ALCOHOL

DOES IT HAVE SOMETHING THAT OTHER PRODUCTS DON’T HAVE? YES, UNIQUE TSUBAKI OIL 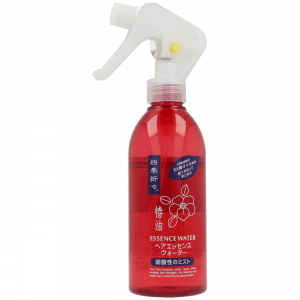 SHIKIORIORI TSUBAKI Hair Moisturising And Regenerating Essence Water has a big-capacity. 250 ml of the cosmetic is closed in a red bottle that goes with a big atomiser similar to the applicators used in most hair-styling lotions. The product is efficient because it has to be used in moderate dosages (excessive amount might weight hair down).

It facilitates combing and protects strands against harmful solar radiation. Moreover, it blocks toxins from getting inside hair.

When it comes to drawbacks of the product, SHIKIORIORI TSUBAKI contains bad, dehydrating and scalp-irritating alcohol (alcohol denat.) that can dehydrate hair as well. Another, fairly controversial ingredient is propylene glycol. Indeed, this alcohol delivers moisture but, at the same time, it can affect damaged and irritated epidermis really badly. What’s more, the product contains preservatives along with comedogenic substances. Because of that, the product isn’t suitable to be applied it to scalp so the cosmetic isn’t going to regenerate hair deeply. Instead, it’s just a decent cosmetic of hair conditioning and look-improving action.

The atomiser is protected by a plastic cap that has to be removed before use. SHIKIORIORI TSUBAKI Hair Moisturising And Regenerating Essence Water should be put on washed, towel-dried, damp hair. It’s important not to apply too much of the cosmetic since excess of it can weight hair down. Damp strands sprinkled with SHIKIORIORI TSUBAKI can be styled as usual.